With modern multi-curve setups, gone are the days where the swap DV01 depends only on the floating forecast curve.  In those days, pre-GFC, we only needed to shock the floating forecast curve to figure out the DV01. Nowadays the discount curves also play a large role in determining DV01, especially since we’ve replaced the old LIBOR curves with either OIS ones or collateral-based ones. The discount curves describe today’s value of a future expected cashflow or payoff, whereas the forecast curves describe the expectation of a future interest rate.

In this article we aim to address the question:

What is the difference between par-DV01 and zero-DV01 for bonds?

Difference between the zero curve and the par curve

When you hear someone talking about the yield curve they usually mean the spot yield curve, i.e. the curve that is used to discount a single cashflow, payoff or spot payment at a given maturity.

Another yield curve that exists is the par curve.

The par curve plots the yield-to-maturity for a coupon-paying bond (priced-at-par) at each maturity, and is very different to the yield curve: 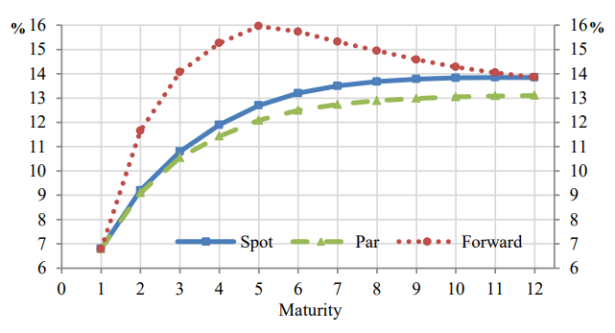 A bond as two prices associated with it:

A bond’s market (trading) value is how much you can buy that bond for today. Bonds can trade higher or lower than their par value because of prevailing interest rates that impact the coupon received over the life of that bond, affecting how much an investor receives from that bond.

Not to confuse matters, sometimes bonds are quoted in the market as a percentage of par as well. Thus, if you see a bond with a market value of 99 then this probably means it is trading at $990 for a $1,000 par bond. It is doubtful it is trading at $99 as that would represent a significant discount and imply large increases in the chance the issuer will default before it matures!

When a bond trades-at-par (or is priced-at-par) then this means its market value equals its par value. It also means that its coupon rate equals its yield-to-maturity. A bond trading at par will often be quoted according to its percentage-at-par, thus a $1,000-par bond trading-at-par will be quoted in the market as 100.

Furthermore, when a bond is priced-at-par, the yield-to-maturity equation has only one unknown (because the right-hand side will equal 100). Therefore it can be solved, and it will be solved to give either the par rates or the yields to maturity. It is often said that one can “obtain par rates from spot rates when each bond in the curve construction is priced-at-par”.

Difference between yield-to-maturity and coupon rate

The coupon rate (also known as the par rate when the bond is trading at par), as discussed, is usually quoted as a percentage-to-par and is fixed. The coupon rate will tell you exactly how much you will receive each payment period. For example, a $1,000-par bond with a 2% annual coupon rate will pay $20 per year until maturity. If that is a 10-year bond, that would be $200 worth of coupon payments plus the face value amount of $1,000 at maturity (total $1,200).

The question is, how much is this bond worth today?

The answer depends completely on how the coupons are structured and the shape of the par curve. Very similar sounding bonds can have very different fair values. How?

Bonds that pay out most of their value as coupons essentially have less risk associated with them because you end up receiving more of your cashflows earlier than you would a zero-coupon bond (ZCB) where you have to wait the maximum amount of time before you receive your money. In that time, one has to factor in events which default the bond.

All else being equal:

Difference between the par and zero DV01

For example, consider a 2-year bond with a face value of $100, a 20% semi-annual coupon and a yield-to-maturity of 4% semi-annually compounded. The total present value of all cashflows

The DV01 is the dollar value change in price of an instrument given a one basis point change in the underlying rate. In the case of bonds, there are two rates one could refer to: the coupon or spot rate or the yield-to-maturity, or YTM. In the former, one could think of the dollar value change in the price of the bond if we shift the entire spot rate curve down by 1bp causing an impact to the present value of the discounted cashflows. The curve here is the spot curve and could be upward-sloping or downward-sloping, and the DV01 is known as the par-DV01 expressed in percentage terms for a 1 percentage point change.

Alternatively, and more commonly, one assumes the underlying rate is the YTM, and thus a yield-based DV01 (just DV01) assumes a flat term structure (YTM is a flat rate curve) and is dependent on the bond’s market price (unlike on the bond’s par value as is the case in the par-DV01 above). Yield DV01 (or just DV01) is expressed in dollar terms for a 1bp shift in the yield.

Both give the same, linear, approximate estimate of the bond price change for a 1bp shift in the yield.

For an interesting discussion on the coupon effect and how it relates to the calculation of DV01 see this page here.

For a discussion on the same topic but on interest rate swaps (instead of bonds) see here.

[3] Melik-Parsadanyan, V., The arithmetics of par, spot and forward curves, International Journal of Economics and Finance, Vol. 8, No. 12 (2016)