It is a method for calculating the appropriate level of initial margin (IM) for non-cleared derivatives; where IM is essentially a reserve for potential future exposure (PFE) during a margin period of risk (MPR), capturing funding costs.

Initial Margin is a reserve for potential future exposure (PFE) during a margin period of risk (MPR), capturing funding costs.

Intuitively, IM must be funded as in most cases rehypothecation is forbidden, and we will see how this plays out in a series of illustrations below.

The Global Financial Crisis (GFC) emphasised the precariousness of non-cleared OTC derivatives, particularly with Lehman Brothers and AIG defaulting on many of their contracts.

SIMM was made public by ISDA (the International Swaps & Derivatives Association) in 2013 and the methodology roughly follows seven key principles:

I have bolded 5th principle, because the use of greeks to calculate the initial margin is a very interesting one which we will talk about later.

A haircut is a discount on the market value of securities taken as collateral. Haircuts can be determined by rules of thumb, negotiation, purpose, or regulatory fixings. Haircuts are put in place by Master Repurchase Agreements (MRAs) for repos, Credit Support Annexes (CSAs) for swaps and derivatives, or by a Clearing Agreements where transactions are exchanged via a Central Counterparty. See the paper written by Wujiang Lou (2017) for more infomation.

As with FRTB (The Fundamental Review of the Trading Book) we see instruments being split in to the same 6 asset classes:

The 3 Components of SIMM

Again, as with FRTB, we see that the standard model for SIMM involves the calculation of 3 components:

Then the Total Portfolio SIMM is equal to the simple sum of everything:

Where Does SIMM Originate?

Suppose we are a derivatives dealer. Generally speaking, our OTC (over-the-counter) derivatives position will be with some counterparty

. Of course, the OTC derivatives position will also be backed by an equivalent hedge position with some hedging desk,

. This result means that we are market risk neutral.

As market prices move and up and down, day-to-day, our OTC derivative position could fluctuate into and out of the money. When this position is marked-to-market, depending on who is currently making a profit on this derivative, a variation margin (VM) will be paid. By demanding this margin, derivatives dealers are able to maintain a suitable level of risk which would cover losses experienced by the dealer if the counterparty were to default.

Let’s say that the counterparty has to pay a VM to us. This is typically in the form of a cash payment, but could be any form of collateral.

The dealer now cannot simply just sit on a pile of collateral, so they hand it over to the Hedging Desk who can hold on to it, but pays the risk-free rate in return:

The next day two things can happen:

We consider option 2, and must make an interest payment, usually in the form of some overnight, collateralised interest rate (for example, the OIS rate):

This biggest risk here is the so-called gap risk (or close-out risk).

If the Counterparty defaults then at that time the dealer has no risk because they are covered by the variation margin (i.e. the Exposure at Default Time is zero). However, default usually takes, on average 10 trading days to play out. In that time, the market could move significantly with us, and the profit that we could have earned in those 10 days would have been lost.

We say that the primary driver for Counterparty Risk (let’s just call it CVA) here is the gap risk. However, as explained above, there is very little Funding Risk (FVA).

Now let’s see what happens to our picture when we introduce Initial Margin (IM).

We need to introduce another entity, called the custodian, to whom everyone, including us, pays IM. Initial Margin needs to be paid for every non-cleared derivatives position. Since we have two of these:

we inevitably pay 2 IMs to the custodian (and we won’t show the IM that the Counterparty and the Hedging Desk also pays):

Now we have 2 outgoing costs. So how does the dealer fund this?

and the same overnight, collateralised interest rate plus a spread (because the funding desk is running its own business and will charge a premium based on supply and demand of short-term loans).

This initial margin being paid by the Counterparty will cover the gap risk in the case of default, which means should the Counterparty default, we will lose practically nothing! Hence, CVA is 0, and FVA is also still 0, as in, the Variation Margin is completely funded.

However, we have a new risk (as outlined by the bold red). This is the risk in being able to fund the Initial Margin, we call this MVA.

If we remove the collateral that the Counterparty posts from the economy then, if they default, we have no compensation. This results in a strong CVA that is roughly equivalent to the Counterparty’s Expected Positive Exposure (or EPE). And since we still have to fund the Variation Margin to the Hedging Desk (Hedging Desks almost always ask for VM when being used to hedge an OTC, non-cleared derivative), we also have a strong FVA that is roughly equivalent to the Counterparty’s Expected Negative Exposure (or ENE).

Under SIMM we still need to post Initial Margin with our Custodian for the Hedge, so this increases the pressure on the funding: 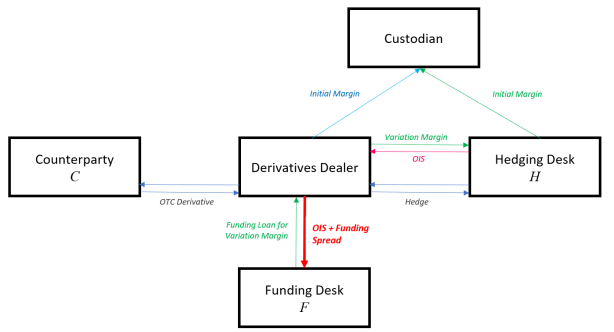 In our pictures above, the MVA (the funding risk for initial margin) is roughly proportional to the amount of IM we need to fund.

According to ISDA standards, the IM is calculated as a 99% 10-day VaR, hence the MVA is roughly equivalent to the VaR of the Counterparty. This is a very rough, intuitive picture of MVA.

Interestingly, according to Lou, W. (2015) shows that neither Counterparty C or Dealer D can effectuate a true funding cost transfer, unless one side backs down and lets the other side act in a market making role. For accounting purposes, the fair value could remain at the risk-free price, leaving MVA in the bid/ask spread.

He goes on to say that this must be the case when the bilateral trades is settled through a Central Counterparty (CCP). The CCP, as the valuation agent, can’t possibly be aware of either side’s IM funding costs, and the only agreeable valuation it can make is to have the IM cost stripped from the CCP valuation, resulting in the risk-free price.

Since September 2016, the calculation of SIMM for all non-centrally cleared OTC derivatives remains a significant challenge. Especially since IM is a capital measure of potential future exposure based on historical data, it is never-the-less finding its way in to pricing models as MVA.

Green and Kenyon (2015) calculate IM via a Value-at-Risk (VaR) by simulation using a fixed set of exogenously determined historical scenarios, ignoring scenario updating. Brigo and Pallavicini (2014) define IM in the pricing measure, as the

-quantile of a Normal variate with its variance matching that of the conditional close-out amount. While scenario updating is captured, connection to the physical measure is lost. ISDA, on the other hand, has come along a provided a standard IM calculation.

Technicalities aside, a Derivatives Desk’s primary concern is how to manage trhe transfer of the added cost of posting IM. As outlined above, such an OTC derivative trade does not offer any economic way to transfer the additional cost, unless one party takes the role of a market maker and includes the cost in the bid-ask spread.

Lou (2016) provides an approach to IM as a delta-approximated VaR model, in the pricing measure, that naturally captures the forward scenario updating, with a portfolio-specific multiplier allowing calibration to external models meeting CCP (Central CounterParty) or BCBS requirements.

The methodology used to calculate IM for a given portfolio is often based on historical Monte Carlo (HSVaR), but input parameters in to this model vary significantly between CCPs (e.g. LCH, CME, ICE, Eurex, ASX, etc…)

as the first-order partial derivative of the current value

. This would be regarded as the change in

given a 1 bp change in

The potential loss of this portfolio would be equivalent to the change in the portfolio value given a 1bp shock of the underlying:

Multiplying both sides by

But we can substitute

Which says that the potential loss of the portfolio is equivalent to the DV01 multiplied by the normalised change in the underlying.

This is a linear relationship between the DV01 and a change in the underlying, hence the worst loss will be simply experienced when the underlying price changes the most, i.e. an extreme value of

. If the portfolio values are Normally distributed then Value-at-Risk (VaR) can be defined as the product of the exposure and the VaR of the underlying, that is:

is the standard Normal deviate corresponding to the specified confidence level (e.g. if confidence equals 95% then

This Delta-Normal VaR is a closed-form solution

The simplest method is the one defined by Jorion, P. as the failure rate method. This gives the proportion of times VaR is exceeded in a given sample. To arrive at this we simply count the number of times

the actual losses exceeds a

-day VaR and then computer

as the failure rate.

Ideally, the failure rate should be an unbiased estimate of the the confidence interval

. So to test this, we want to know, at a given confidence level

is too large or too small under the null hypothesis that

, say, for a 99% confidence level. Note that this test makes no assumption about the distribution of returns; it is fully non-parametric.

However, the number of exceptions should follow a binomial distribution

which we also know has expectation

. So we can set up a null hypothesis that the number of exceptions to VaR follows a binomial distribution. When the total number of days included in the backtest

The binomial distribution can therefore be used to test whether the number of VaR exceptions is acceptably small.

is a set of contingent claims whose aggregated values (exposures) are covered by a particular CSA (collateral agreement). We let

denote the number of margin sets in the portfolio

is a set of margin sets whose post-margin exposures can be aggregated.

For more information about the mathematics of Netting Sets, see Biagini et al. (2019).

is the scaling factor of the

‘th expiry date. The Scaling Factor is defined as